With as many as 7 precisely placed ballast locations that combine for the 5400-pounds of ballast, the industry’s largest factory ballast capacity in a 23-foot boat.

A new high speed ballast system also known as “the Baller”. With 4 stainless steel 2″ ball valves (2 in 2 out) bolted through to the flanges eliminating everything plastic.

With 20 degrees of dead-rise at the transom the Opti-V Hull displaces more water with less weight while preserving a great rough-water ride.

Exclusive to the Ri Series, the Touch Revo Side by Side 12” x 12” HD Dash System is composed 2 12” by 8” screens mounted side by side working together or independently so you can see and control everything at once.

The aggressive DropZone Auto Tower folds up quickly and smoothly at the push of a button. Custom made for Centurion by Roswell the DropZone comes standard on the Ri230.

Centurion’s Opti-V hull is so efficient thanks to lifting strakes and pads built into the running surface, it’s 20-degrees of deadrise cuts through the water with minimal resistance. Available as a feature of the Range of View (ROV) System in 2022 Ri Series boats, get real time trip and fuel consumption data. It’s no secret which wake boat brand is the most efficient.

Who would have thought going smaller would be such big news! With as much as 5400 pounds of ballast available in the new 23-foot Centurion Ri230, the incredible surf wave has become a bigger topic of conversation because it is being generated by the smallest of the Ri Series Centurions. But it wouldn’t be an Ri if it wasn’t also a revolution innovated in addition to being another huge step in the evolution of the wake boat.  This 23-foot wake boat is the epitome of a fundamental and sudden shift in power. But this new Centurion is not turning the tide in the battle for wake surfing boat mindshare based on its popular size or an extra large price tag. The Ri230 is attacking all areas of innovation simultaneously with a deeper, thoughtfully refined, more aggressively styled and better performing 23-foot wake surf boat; that manages to hold a reasonable price point. The World’s best waves, wakes and ride have gotten even better with the evolved running surface of the Ri230’s Opti-V Hull. The look of the Centurion Ri230 merges the depth of the Ri Series with the sharp lines of the Fi Series achieving an aggressive, head-turning style. Centurion engineers have added a number of lake life-improving refinements to the Ri230 for as many as 14 people. The 2022 Centurion Ri230 includes Centurion’s Remote Engagement Continuous Optimization Network (RECON) telematics by Osmosis, Lay-flat Sun Pad Lounge Seats, Revo 12-inch by 12-inch side by side touch screens, the all new available RAMFILL2  or as well call it the “Baller” ballast system, the available Range of View (ROV) bow to stern camera system with live fuel usage data, and the available Centurion Shift Thruster System by CMI. The Ri230 is revolution innovated. Let us prove it to you. 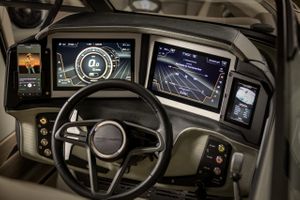 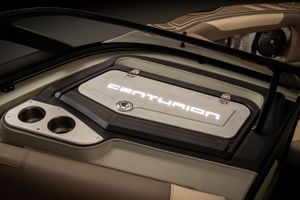 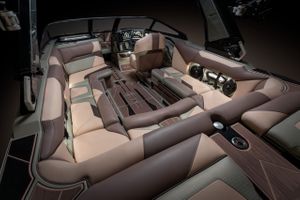 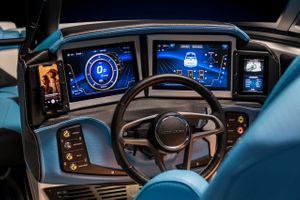 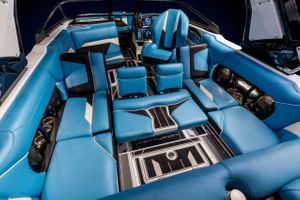 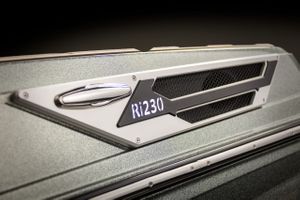 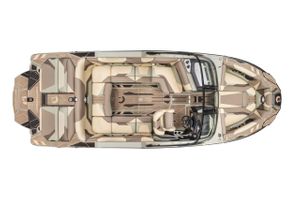 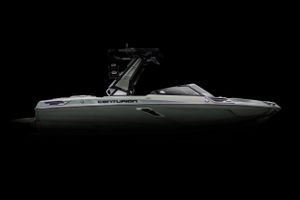 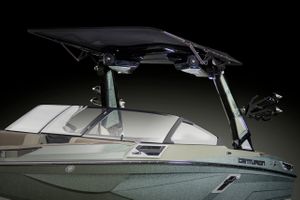 Exclusive to the Ri230, Ri245 and Ri265, the Centurion ROV is a 5″ x 3″ “Range of View touch display that gives the driver a range of views of the boat’s position in the water. The front facing camera allows you to see things that could be in your blind spot.

The aggressive DropZone Auto Tower folds up quickly and smoothly at the push of a button. Custom made for Centurion by Roswell the DropZone comes standard on the Ri230.

Centurion’s Opti-V hull is so efficient, it’s 20-degrees of deadrise cuts through the water with minimal resistance. The first of it’s kind the Ri230 offers real time trip and fuel consumption data. It’s no secret which wake boat is the most efficient. 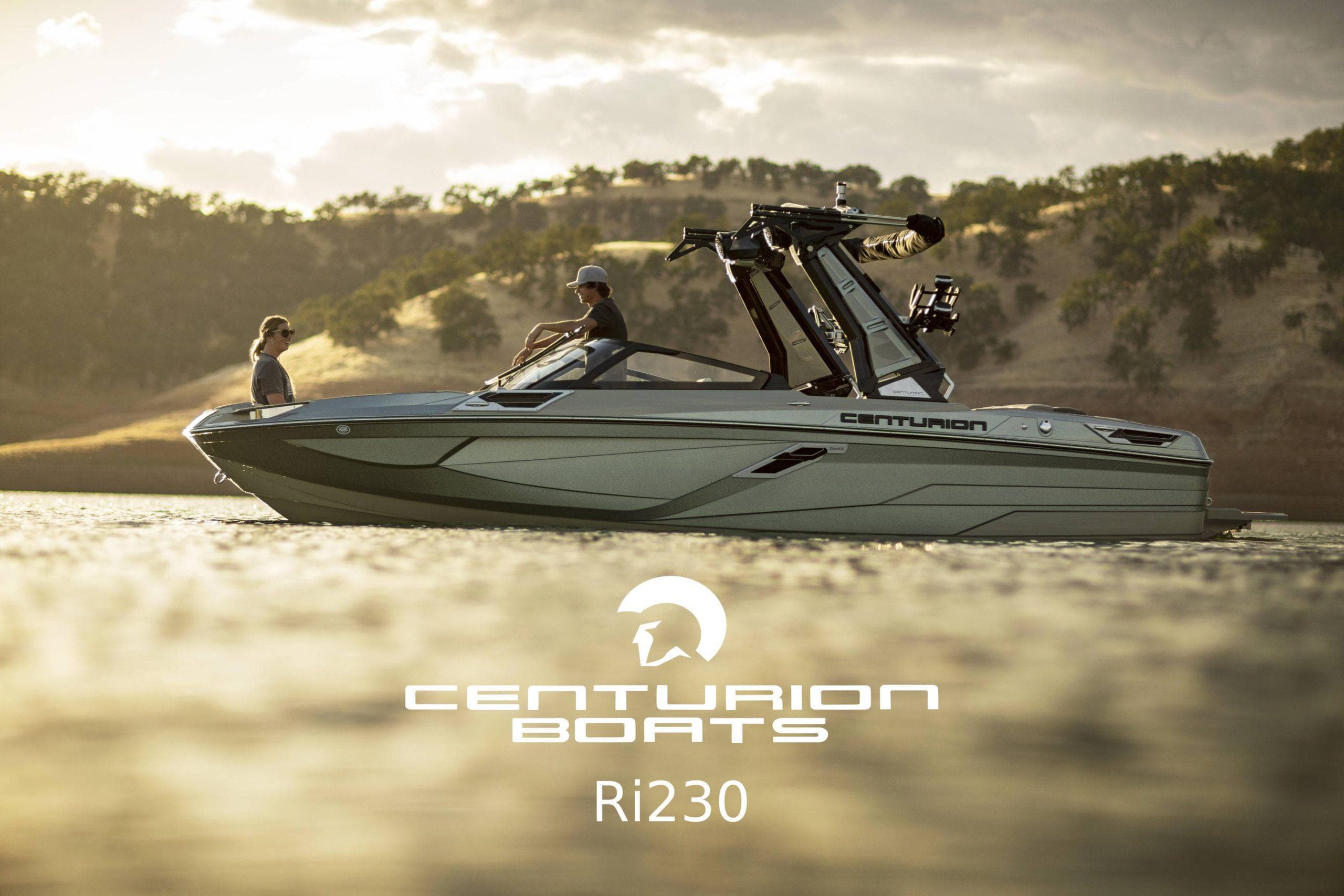 Fineline Industries LLC reserves the right to change model specifications, standard and optional equipment, color schemes and pricing at any time without notice or incurring obligations. It is the Dealer’s responsibility to adhere to all State and Local regulations and laws governing minimum requirements needed on each boat, such as trailer brakes, kill switches and other safety equipment. 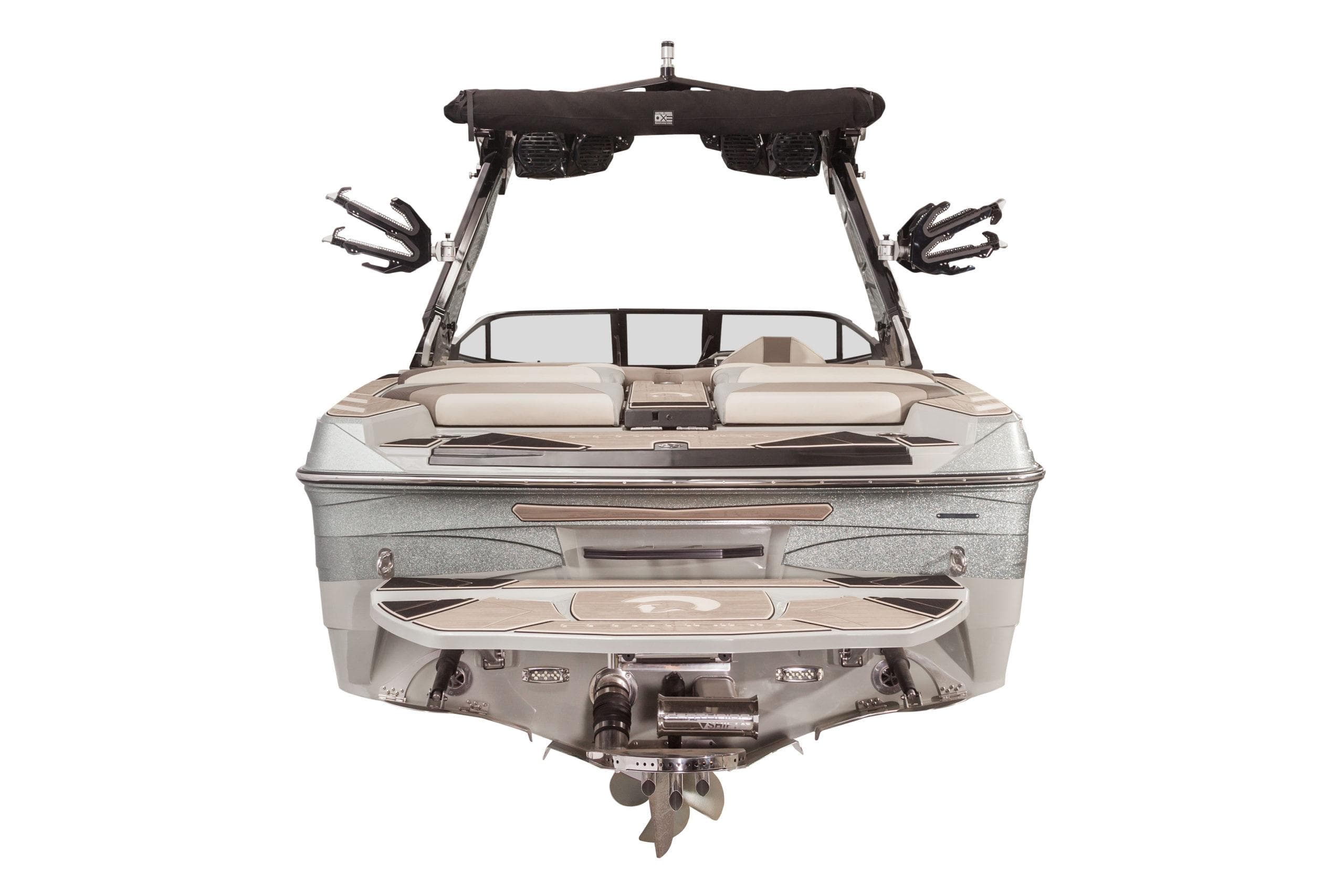 Design Your Dream Boat Online or Visit One of Our Dealers!

Centurion Boats is a manufacturer of industry leading wakeboard and wakesurf powerboats. When you visit one of our many dealers, you can test-drive our different models so that you can decide exactly what you want on your custom boat! Additionally, you can design a boat online, outfitting it with an array of different options to suit your sport or leisure needs!

Use the configurator to design your pefect Centurion Boat

Use the configurator to design your pefect Centurion Boat

Schedule A test ride through your local Centurion Dealer